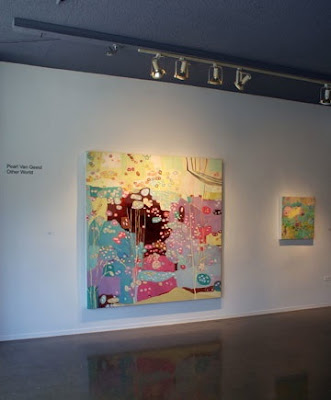 Pearl Van Geest loves paint, and in a very literal way, the paint loves her back: the boundary between herself and the canvas could be described as a semi-permeable membrane. She paints with the sort of id-soaked, primary process-driven intensity often associated with "intuitive" or "outsider" art. However, she and her paintings are far from naive: she is a broadly educated, well traveled person, and a highly skilled, technically adept painter.

In the tradition of the Automatistes, she appears to be able to allow her subconscious to free itself from rational restrictions. Her colours are saturated and sensual. The subject matter, and her very technique, is carnal and oral.

Jean Paul Riopelle said: "Painting is an illness. It's a germ you catch one day". I think he was referring to the experience of simultaneously consuming, and being consumed by, the creative process. Van Geest speaks of her art in similar terms:
"Can the boundary or skin between the human and natural world be dissolved or made transparent by the energy of desire, by Eros, by love, by ecstasy and a desire to connect: to be at once subsumed and to possess what we see, feel, touch, taste and hear?" 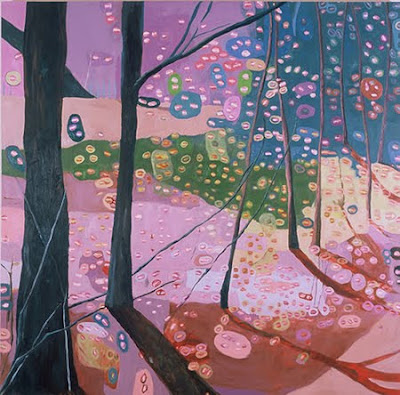 Above is one in a series of paintings begun in 2001 in which "the canvas is first covered in lip prints/kiss marks; used for their mutable symbolic significance and also for their remarkable morphological similarity to other natural forms, suggesting by implication, in addition to love and sensuality, our essential corporality and connection with the rest of the natural world."

In 2006 she began her "flower-eating" paintings. These paintings are self portraits, painted from a series of photographs of herself in the act of consuming lilies. Lilies are sexy, with male and female sex organs exposed and unashamed. As the series progresses, these paintings become increasingly disinhibited. In the most recent, the pollen is smeared on her face, a sensual merging of self with the natural world. 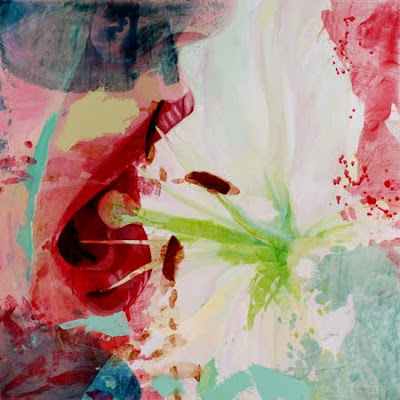 I've never met Van Geest, but we have recently had a brief e-mail correspondence. She wrote:
"In the flower-eating paintings I was interested in playing with the lily contrasted with the datura. The datura and its family relative Belladonna, has a darker association in mythology and also pharmacologically, having being been used "recreationally" as a hallucinogen and also apparently having been given to women during labour. Among its active ingredients is atrophine and women used to put drops their eyes to dilate their pupils to appear more alluring. Witches made a "flying salve" which included datura of belladonna as one of the ingredients. The lily in medieval paintings of the Virgin Mary, represented the virgin birth and in some versions of Roman mythology, Juno impregnated herself with a lily."

This seems as a good place as any to mention that Van Geest was originally educated as a scientist, and entered art school after several years of travel and teaching high school Biology and Chemistry. I asked her about her transition from the world of science to the world of art. She wrote: "I love science - the observing, looking closely, inquiry, problem solving, knowing something about the inside of things and how things work and exploration. I like how learning about science makes the world seem even more miraculous. I love grand views and the worlds inside small intimate things like lichen and club moss. I like observing the same things over and over again, seeing the changes. I always drew, painted and took art courses while doing my BSc and also in high school. In grade 13 I received the art award and the biology award so the split (which as you know more than me isn't really as some people make it out to be, science and art both being creative and open endeavors) was always there..I was longing to go to art school. Making art became more and more of an imperative. I wanted to do it all the time. ."

Twenty years after first entering Guelph University to study biology, Van Geest graduated from Ontario College of Art and Design. She enjoyed critical recognition straight out of the gate, with awards and grants, and shows at some impressive Toronto and area galleries. In 2003, she was a finalist in the prestigious RBC painting competition, and in 2008, she was recognized by inclusion in the "emerging artist" category for Magenta Foundation's "Carte Blanche 2".

From Van Geest's website: "I am interested in the intersection of art and science, with questions that arise about the nature of reality and the natural world, our place in it and perception of it. In my paintings I explore the boundary or “skin” between the human and the natural world and ways in which our consciousness, and sensual and cultural perceptions can both facilitate and impede an experience of the natural world."

Van Geest has spent productive stretches of time in residence at Pouch Cove, Newfoundland. The result has been landscape paintings, which begin "as simple pencil line sketches, some done while sitting on the cliffs recording the pattern of the waves on the sea over a period of time ". Here again, her method recalls one technique of the Automatistes, in which paintings emerged from gestural, "automatic" drawings, the purpose of which was to over-ride the conscious influence of the ego and subvert the influence of culturally specific aesthetic judgement.

In Newfoundland, she became "compelled by openings and splits in the world...
The perspective is reversed, the mouth has become a cave". 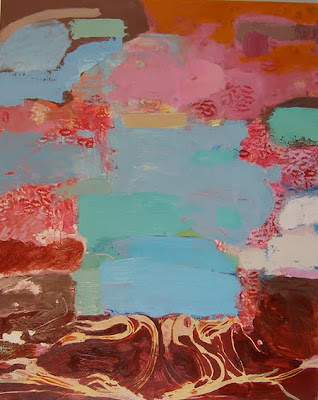 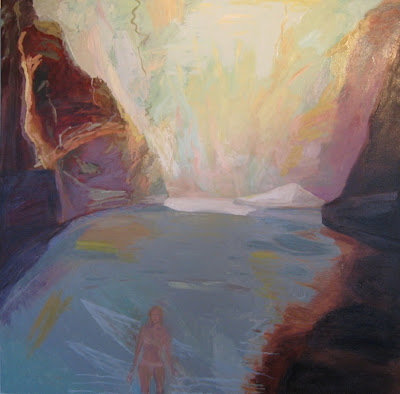 The exploration of boundaries, permeability and portals are constant themes in Van Geest's work. This is the common thread through the three bodies of work. In Freudian theory, the individual whose development has been arrested at the oral stage forever struggles with boundary issues. Unable to differentiate between the self and the other, the person remains un-individuated, and forever unfulfilled in the wish for impossible merger and "perfect love". However, the straightforward application of this kind of analysis to Van Geest's work would be reductive, and do a disservice to the subtle complexity of her dance with paint and canvas. Psychoanalyst Ernst Kris used the phrase "regression in service of the ego" to describe the creative life of the successful artist. This is what she accomplishes. She has the ability to go "there", to use her considerable skill and artistic gift to translate the experience, and then to "bring it back". Her paintings are gorgeous celebrations of the most fundamental aspect of being human.